There are some astonishing things you're not being told about Malaysia Airlines Flight 370, the flight that simply vanished over the Gulf of Thailand with 239 people on board.

The mystery of the flight's sudden and complete disappearance has even the world's top air safety authorities baffled. "Air-safety and antiterror authorities on two continents appeared equally stumped about what direction the probe should take," reports the Wall Street Journal.

WSJ goes on to report:
"For now, it seems simply inexplicable," said Paul Hayes, director of safety and insurance at Ascend Worldwide, a British advisory and aviation data firm. 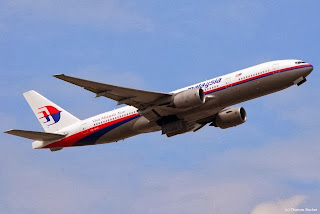 While investigators are baffled, the mainstream media isn't telling you the whole story, either. So I've assembled this collection of facts that should raise serious questions in the minds of anyone following this situation.

• Fact #1: All Boeing 777 commercial jets are equipped with black box recorders that can survive any on-board explosion
No explosion from the plane itself can destroy the black box recorders. They are bomb-proof structures that hold digital recordings of cockpit conversations as well as detailed flight data and control surface data.

• Fact #2: All black box recorders transmit locator signals for at least 30 days after falling into the ocean
Yet the black box from this particular incident hasn't been detected at all. That's why investigators are having such trouble finding it. Normally, they only need to "home in" on the black box transmitter signal. But in this case, the absence of a signal means the black box itself -- an object designed to survive powerful explosions -- has either vanished, malfunctioned or been obliterated by some powerful force beyond the worst fears of aircraft design engineers

.
• Fact #3: Many parts of destroyed aircraft are naturally bouyant and will float in water
In past cases of aircraft destroyed over the ocean or crashing into the ocean, debris has always been spotted floating on the surface of the water. That's because -- as you may recall from the safety briefing you've learned to ignore -- "your seat cushion may be used as a flotation device."
Yes, seat cushions float. So do many other non-metallic aircraft parts. If Flight 370 was brought down by an explosion of some sort, there would be massive debris floating on the ocean, and that debris would not be difficult to spot. The fact that it has not yet been spotted only adds to the mystery of how Flight 370 appears to have literally vanished from the face of the Earth.

• Fact #4: If a missile destroyed Flight 370, the missile would have left a radar signature
One theory currently circulating on the 'net is that a missile brought down the airliner, somehow blasting the aircraft and all its contents to "smithereens" -- which means very tiny pieces of matter that are undetectable as debris. The problem with this theory is that there exists no known ground-to-air or air-to-air missile with such a capability. All known missiles generate tremendous debris when they explode on target. Both the missile and the debris produce very large radar signatures which would be easily visible to both military vessels and air traffic authorities.

• Fact #5: The location of the aircraft when it vanished is not a mystery
Air traffic controllers have full details of almost exactly where the aircraft was at the moment it vanished. They know the location, elevation and airspeed -- three pieces of information which can readily be used to estimate the likely location of debris.
Remember: air safety investigators are not stupid people. They've seen mid-air explosions before, and they know how debris falls. There is already a substantial data set of airline explosions and crashes from which investigators can make well-educated guesses about where debris should be found. And yet, even armed with all this experience and information, they remain totally baffled on what happened to Flight 370.

• Fact #6: If Flight 370 was hijacked, it would not have vanished from radar
Hijacking an airplane does not cause it to simply vanish from radar. Even if transponders are disabled on the aircraft, ground radar can still readily track the location of the aircraft using so-called "passive" radar (classic ground-based radar systems that emit a signal and monitor its reflection).
Thus, the theory that the flight was hijacked makes no sense whatsoever. When planes are hijacked, they do not magically vanish from radar.
Conclusion: Flight 370 did not explode; it vanished
The inescapable conclusion from what we know so far is that Flight 370 seems to have utterly and inexplicably vanished. It clearly was not hijacked (unless there is a cover-up regarding the radar data), and we can all be increasingly confident by the hour that this was not a mid-air explosion (unless debris suddenly turns up that they've somehow missed all along).
The inescapable conclusion is that Flight 370 simply vanished in some way that we do not yet understand. This is what is currently giving rise to all sorts of bizarre-sounding theories across the 'net, including discussions of possible secret military weapons tests, Bermuda Triangle-like ripples in the fabric of spacetime, and even conjecture that non-terrestrial (alien) technology may have teleported the plane away.
Personally, I'm not buying any of that without a lot more evidence. The most likely explanation so far is that the debris simply hasn't been found yet because it fell over an area which is somehow outside the search zone. But as each day goes by, even this explanation becomes harder and harder to swallow.
The frightening part about all this is not that we will find the debris of Flight 370; but rather that we won't. If we never find the debris, it means some entirely new, mysterious and powerful force is at work on our planet which can pluck airplanes out of the sky without leaving behind even a shred of evidence.
If there does exist a weapon with such capabilities, whoever control it already has the ability to dominate all of Earth's nations with a fearsome military weapon of unimaginable power. That thought is a lot more scary than the idea of an aircraft suffering a fatal mechanical failure.

About the Author:
Mike Adams (the "Health Ranger") is the founder of NaturalNews.com, an independent news source covering personal and planetary wellness from nutrition to sustainable living. He's written thousands of articles on nutritional therapies, natural remedies and health care reform, attracting a following of millions of readers around the world.